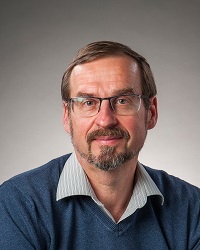 The research in the laboratory is focused upon the investigation of membrane and cellular mechanisms regulating the arterial function in physiological conditions and in disease using contemporary laboratory methods which include small vessel myography, electrophysiological patch-clamp technique, molecular biological and imaging techniques.

Arteries determine blood pressure by changing their diameter which is controlled by the activity of ion channels. One group of ion channels ubiquitously present in smooth muscle cells (VSMCs) which compose the arterial wall, K+ channels are central for the regulation of resting membrane potential hence vascular tone. Among them voltage-gated K+ (Kv) channels are abundant in pulmonary arterial SMCs and contribute to an important physiological response to hypoxia termed hypoxic pulmonary vasoconstriction (HPV). We initially demonstrated a significant decrease in Kv channels expression (which would results in membrane depolarization and vasoconstriction) in chronic hypoxia in the rat (Smirnov et al., 1994), an animal model of pulmonary hypertension. Recently, we demonstrated that Kv channels in PASMCs are closely linked to the mitochondrial function via a novel mitochondrial-mediated Mg2+-dependent mechanism (Firth et al., 2008). This unique regulatory mechanism is due to an existence of sub-membrane population of mitochondria in PASMCs and is not present in systemic SMCs (Firth et al., 2009).

In collaboration with colleagues from the Department of Physics we developed a novel approach to investigate protein complexes on the cell surface using atomic and magnetic force microscopy. With this approach we successfully demonstrated distribution of individual endothelin receptor molecules on the surface of aortic SMCs (Moskalenko et al, 2010).

In collaboration with colleagues from the University of Calgary, we showed specific distribution along the renal vascular tree of another type of K channels, the inward rectifier (KIR), and demonstrated their functional importance in renal afferent arterioles which are central for blood pressure control (Chilton et al., 2011).