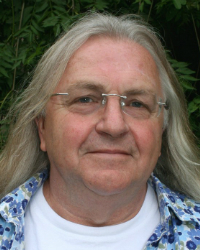 Within neuronal networks in the central nervous system, excitatory synaptic transmission is mediated by the amino acid, glutamate, and inhibition by gamma-aminobutyric acid (GABA). Research in my lab is focussed on the role of these transmitters in network activity in normal and abnormal functional states. Experimental work largely employs electrophysiological approaches (intra and extracellular recording, whole cell patch clamp) conducted in in vitro cortical brain slice preparations from rat brain. The particular area of the brain that I am interested in is the entorhinal cortex, which plays pivotal roles in learning, memory and other cognitive processes, and is implicated in many disorders of the CNS, including epilepsy, Alzheimer’s disease and schizophrenia.

I have a long-standing interest in studying short-term dynamic changes in transmission at synapses in the entorhinal cortex. Presynaptic release of both GABA and glutamate is controlled by feedback interactions of the transmitters with receptors on the presynaptic terminals, Both transmitters are released spontaneously from presynaptic nerve terminals, and provide a continuous level of background synaptic "noise" in postsynaptic neurones. It is becoming clear that this background noise is not spurious, but is functional in setting the level of excitability of neurones and, therefore, the processing capabilities of the network. We have been particularly involved in delineating the roles and mechanisms associated with control of release by presynaptic ionotropic glutamate receptors (especially NMDA and kainate receptors), but also by G-protein coupled receptors (mGluR and GABAB). These studies have involved patch clamp recordings to look at spontaneous synaptic activity in individual neurones. However, we have recently established the use of a mathematical approach to derive synaptic conductances from membrane potential fluctuations, from which we can quantify background inhibition and excitation, and examine how the balance between them determines the excitability of individual neurones as a function of network activity.

Other research in my lab focuses on the control of synchrony in neuronal networks of entorhinal cortex. I am interested in how oscillatory activity is established in neuronal networks and how this relates to cognitive processing, particularly in relation to drugs that can enhance cognition. More recently, we have been examining how oscillatory activity relates to the early life development of spatial navigational processing in temporal lobe networks. There is a clear association between eye opening, appearance of high frequency (40-50 Hz gamma) network oscillations and establishment of specific navigation related properties of ‘grid’ cells in the entorhinal cortex, and we are examining the mechanisms underlying this link.

I have a particular interest, in how network activity is altered in hypersynchronous states, particularly in temporal lobe epilepsy, and how anticonvulsant drugs may repair abnormal network activity in this condition. We have previously studied network activity and the role of presynaptic control of transmitter release in tissue from chronically epileptic animals using an in vivo model (the pilocarpine model). More recently, we have developed a novel model of epilepsy induced entirely in vitro in slice preparations from rat brain maintained in organotypic culture for periods of weeks to months. This work was been funded by the National Centre for Reduction, Refinement and Replacement of animals in research (NC3Rs) and has the potential to substantially reduce animal usage for basic epilepsy research. In a very exciting development (with colleagues in Birmingham and Newcastle) we have extended this culture approach to living human brain tissue obtained from surgical interventions for refractory epilepsy, greatly extending the viable lifetime of this valuable tissue for basic epilepsy research.

Organotypic Culture to Maximise the Utility of Living Brain Tissue

A Chronic Model of Epilepsy in Organotypic Brain Slice Cultures

Functional role of kainate receptors in the rat entorhinal cortex

The role of synaptic noise in cortical excitability