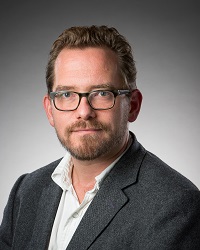 My research focuses on using the fossil record to understand major evolutionary transitions, both at the level of the organism and at the level of the ecosystem. I'm interested in the origins of new kinds of organisms, including the evolution of birds from dinosaurs and the evolution of snakes from lizards, as well as major changes to the biosphere caused by geologic events, particularly the Chicxulub asteroid impact that wiped out the dinosaurs. These transitions, which are responsible for the organisms and ecosystems all around us today, can only be understood using the paleontological record: a complete understanding of the patterns and processes of evolution requires fossils.

Over the past few years, I’ve focused on using the Cretaceous fossil record to better understand the end-Cretaceous mass extinction that wiped out the dinosaurs. Using vertebrate microfossils, it has been possible to show that not only did the asteroid cause the extinction of the dinosaurs, it also led to major extinctions among birds, lizards, and snakes, which then drove adaptive radiations in the aftermath. Other projects have focused on the origin of major groups of animals. Fossils of a primitive Cretaceous snake have helped shed light on the evolution of snakes from burrowing lizards, and a restudy of the Jurassic bird Archaeopteryx have revealed a surprisingly primitive wing structure, better suited for gliding than active flapping flight.

My goals are to continue work on the end-Cretaceous extinction event, and to launch new projects aimed at understanding vertebrate radiations and extinctions during the Cretaceous and Paleogene. In the meantime I am busy working on dinosaur systematics, including revisions to horned dinosaurs and ornithomimosaurs… and for something completely different, I have a new Theory on the Brontosaurus.

I am always happy to talk with prospective graduate students and postdocs.

A new species of Coloborhynchus (Pterosauria, Ornithocheiridae) from the mid-Cretaceous of North Africa

Juvenile spinosaurs (Theropoda: Spinosauridae) from the middle Cretaceous of Morocco and implications for spinosaur ecology

Cretaceous-Cenozoic Evolution of the Crocodylia, and the Role of Environmental Change in Driving Diversity

Survival of duplicate genes in the vertebrate genome: A matter of splice or death