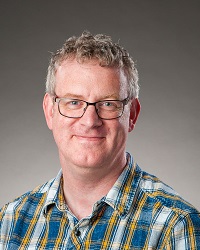 My research focuses on the neuronal changes caused by drugs of abuse, and how they relate to drug tolerance and addiction.

Morphine and related opiates such as heroin act by activating the µ-opioid receptor and are effective as analgesics, as well as being abused on the street. Following prolonged administration, tolerance occurs, whereby there is a need for escalating dose of that drug to maintain effect. This complicates pain-relief therapy as well as contributing to the social problems inherent in heroin addiction.

The mechanism(s) underlying opiate tolerance are poorly understood, but we have recently provided evidence that µ-opioid receptor desensitization may be a key process.

Interestingly, we have recently uncovered the fact that different ligands at the µ-opioid receptor can cause receptor desensitization and internalization by entirely different intracellular signalling mechanisms. On-going research is designed to investigate the precise molecular mechanisms underlying mu-opioid receptor desensitization and internalization, and determine precisely how these events relate to tolerance using behavioural methods.

Intake of drugs of abuse such as heroin, cocaine and ethanol can result in compulsive drug use. Synaptic plasticity is thought to underlie memory formation, and as compulsive drug use is a learned behaviour, current interest in the field of drug addiction is focusing on the role of synaptic plasticity in the responses to drugs of abuse. On-going research is designed to gain a better understanding of the molecular processes underlying synaptic plasticity caused by drugs of abuse in areas of the brain such as the ventral tegmental area, nucleus accumbens and prefrontal cortex, how these processes can be modulated, and their effects on drug addiction.

We use a combination of electrophysiological approaches and real-time cell imaging coupled with behavioural measures of reward, analgesia and respiratory depression.

Sex differences in effects of kappa opioid agonists and stress

A Single Compound Alternative to a Buprenorphine/Naltrexone Combination

Does the combination of buprenorphine/naltrexone have antidepressant efficacy in animal models?